Our body renovates itself constantly; hence our body identity would not be based on matter, on the actual molecules and cells that constitute it in a particular moment, but on the structure or form that stays, a structure that would be coded in the DNAwe inherited from our parents.But this is not exact! It happens that our body consists of 1014 cells, but just a tenth of them, 1013, are human, coded with our DNA while the rest, 9·1013, are microbes, mostly bacteria in the gut that play a role in digestion. They can be found in the nose, ears, anus, everywhere on the skin, particularly armpits and groin. 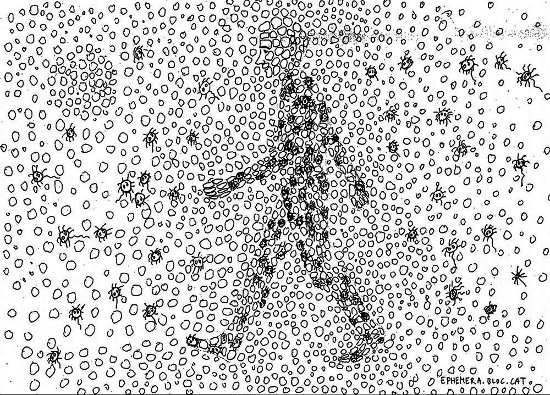 Among other things, they produce some vitamins such as thiamine, pyridoxine and vitamin K. They digest “complex plant polysaccharides, the fiber found in grains, fruits and vegetables that would otherwise be indigestible (Read article in nytimes)  Scientists from Stanford University have attempted a census of the gut microflora. They have identified 395 species of bacteria. Now they are working in sequencing the genes of the human gut microflora, and until now, 78·106 have been listed. But estimates point that “the vast majority of the genes that a person carries around are more microbial than human. Humans are superorganisms, whose metabolism has both microbial and human attributes.”

It’s extraordinary, “we” is not just “us”, our cells, in order to survive we need a foreign community to perform certain tasks. This is biological outsourcing. And this community outnumbers us in a proportion of 9:1.

Biological outsourcing happens also at the most basic level of biology, according to the endosymbiotic theory. Mitochondria, the organelle that charge “the batteries” that power processes in eucaryotic cells (that is, protozoa excepted, all cells in animals and plants), would be bacteria that in a certain moment across evolution were incorporated into cell space and logic.