It’s almost 30 years since I bought a copy of the engraving Melencolia I by the Deutsche Druckerei , during a trip in Germany, fascinated by the meditative expression of the figure, and the perception that thre was a message hidden in the objects around her. Ten 10 years later I bought the book “Saturn and melancholy,” by Klibansky, Panofsky and Saxl, originally published in 1964, but it was not until recently that I found the opportunity to read it. It locates Dürer’s engraving in the context of evolving conceptions about Saturn and melancholy. 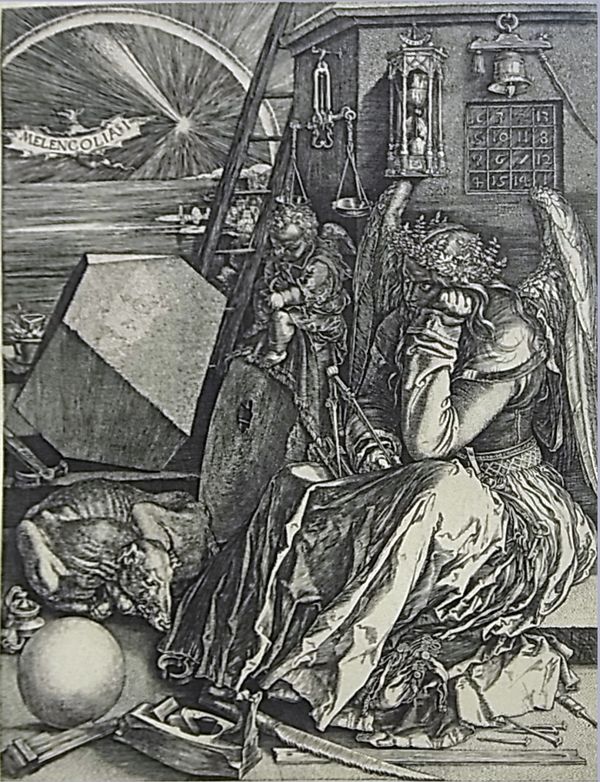 Dürer would have merged the representation of a Saturnian melancholy, a dark face, head leaning on the hand, with the representation of geometry as a liberal art, a figure with geometric and mathematical tools. The essay’s hypothesis is that Melencolia I engraving follows an idea of Agrippa von Nettesheim exposed in Occulta Philosophia, and corresponds to a certain melancholia imaginativa, the first stage of a group of three, the other two being malencholia rationalis and melancholia mentalis.
The ancients related four body fluids or humors to different combinations of basic properties. This is consolidated with Hippocrates and Galen and four temperaments or moods:

Theophrastus, the probable author of Problemata XXX.1 (formerly attributed to Aristotle) proposed  a theory about genius stating that black bile had the property of amplifying faculties or emotions, as it could become very cold or very hot. When cold it would lead to clumsiness while when hot it would raise us to rapture and, in excess, to insanity. Those that stay away from the extremes would be “superior to others in terms of mind sharpness or in arts”. Cold in excess would induce depression and suicide. An alternative point of view about genius , with no relation with black bile, is proposed by Plato in  Phaedrus; “divine madness”, a certain state of ecstasy that allows the philosopher, the lover or the poet to grasp pure Forms beyond reason.

This conception of melancholy was not shared by everyone. The Stoics and later, Galen, considered melancholy as a disease. Instead of a certain humor that could enable genius or depression, the thesis was inverted; sadness and depression would be an outcome of an excess of intellectual activity. Saturn, overthrown  by his sons, was associated with agriculture, old age, coldness, covetousness, selfishness and melancolics. In late antiquity and the Middle Ages prevails this negative sense, although for neoplatonics Saturn was related to intellect (represented as a god that meditates, the head leaning on the hand), and for the orphics it was the architect of the world.

Marsilio Ficino, neoplatonist, was the first to relate Plato’s furor divinus with melancholy. Like body and mind, connected through a subtle fluid called spiritus, the whole universe was like a huge organism, with a universal mind connected to a universal matter through a certain spiritus mundanus. Mens imaginativa was attributed to Mars, mens rationalis to Jupiter and mens contemplativa to Saturn.

In Dürer’s engraving we find symbols related with the depiction of melancholy: the key and the purse, symbols of wealth and power, the closed fist for the covetous and, clearly, the head leaning on a hand. The dog, the bat and the marina with ships are interpreted as Saturn symbols.  The garland on the head  could be an antidote against saturnian melancholic’s depression, perhaps, white water-crowfoot,  or watercress .  Number 4 in the magic square would be an invocation to Jupiter. We find also symbols corresponding to the representation of geometry as one of the seven liberal arts, either concerning theory (the sphere, the book, the ink), descriptive geometry (the famous rhombohedron) or practical uses (the cabinetmaker tools, the hammer, the plane, the tongs).

In Occulta Philosophia, Agrippa follows Ficino’s idea that the powers of terrestrials things are “emanations from a divine unity transmitted by planets” and also other daemons of inferior rank. After dealing with astrology and talismans, in the third book he introduces Vaticinium, direct revelation, when “the soul, inspired by superior powers, meets the ultimate grounds of this world and the next one, and miraculously sees all that is, has been, or will be in a  remote future.” This is only possible when the soul is not busy in other activities (vacat). This “vacatio animae” can take three forms: true dreams (somnia), elevation of the soul through contemplation (raptus), and enlightening of the soul by daemons (furor). This furor reminds of Plato and can proceed from the muses, Dionysos, apollo, Venus or melancholy.

So, there would be three melancholy stages. The first one corresponds to the faculty of imaginatio, mechanical arts such as architecture or painting and it could foretell about natural disasters like floods (something depicted in the engraving!). The second one relates to the faculty of ratio, knowledge of natural and human things and could make profecies about politics events. In the third one we find the mens, the knowledge of divine secrets, angeology and theology; it could make predictions about religious events. Dürer’s engraving would illustrate the first stage. This would explain the “1” qualifying the title.

Dürer was very interested in the art of measurement and wrote a book explaining its utility, not only for “painters, but also for goldsmiths, sculptors, masons and carpenters”. Geometry was the model for sciences. In his thirties, impassioned by the possibitities of art theory learned from Jacopo de Barbari, he believed that perhaps he could define universal and unique beauty with the help of compass and square.

[Was this the project of the Dresden Sketchbook?] 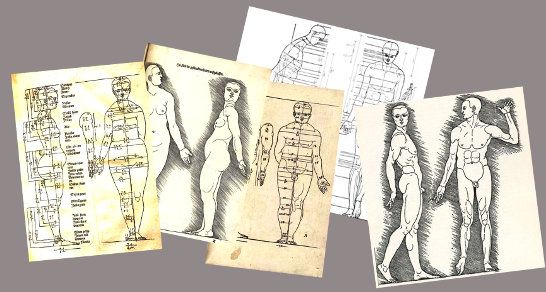 Ten years later, and just before attempting the engraving M1, he would wrote in the Nachlass “what is Beauty, I don’t know […] there is no man alive on earth who can tell or prove what could be the most beautiful human figure. Only God can judge Beauty […] I think there is no man alive who can contemplate the ultimate beauty even in a small creature so even les could he in a human being […]

[ I wonder, when Dürer was writing this, was he thinking of the humble and sublime turf watercolour? or the hare?] 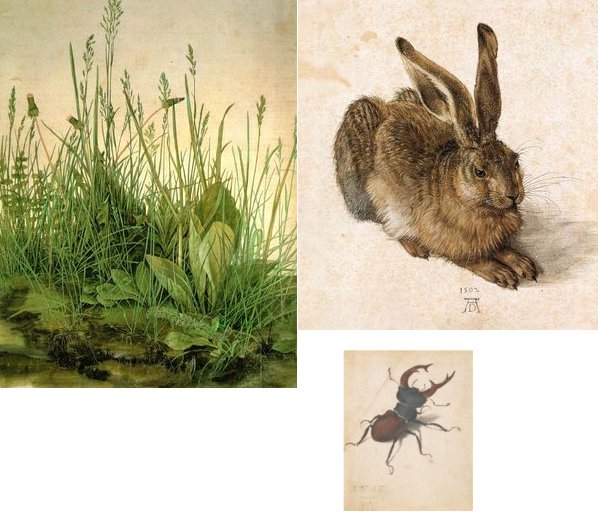 “But God knows about these things, and if He feels like revealing it to someone, this person will know it too. .. But I can not prove any particular measure that gets close to supreme beauty”.

Other than the illustration of Agrippa’s ideas, in Melencolia 1 there is, perhaps, a trace of the fatigue caused by the quest in search of abolute beauty, the hands loose its grip on the geometrical compass, and atired gaze is lost in the horizon.