The human ant farm provided a panoramic view of human activities. What about a closer look? If some extraterrestrials fetched us, and back in their planet would like to expose us like animals in a zoo, what kind of cage would be built? Perhaps the human zoo would consists of a series of sets staged for different scenes of a play. And every day, without no significant changes, the same scenes would be performed again and again. For instance:

Scene1: a bedroom and a bathroom. The subject sleeps, wakes up, washes, gets dressed and goes.
Interlude: commuting to work, by bike, car or public transportation.
Scene 2: An office, desks with computers, papers, coworkers. The subject works, talks to other people, has lunch break.
Interlude: commuting back homeScene 3: This one can be diverse, a garden, a shop, a gym. The subject can do different activities depending on the day, weather or humor. He reads, exercises, takes care of a garden, perhaps picks his children from school.
Scene 4: a sofa, a table, a kitchen. The subject cooks some food, has dinner, clears the table, sits on the sofa and watches TV.
Scene 5: same set has scene1, a bedroom and a bathroom. The subject undresses, pees, brushes his teeth and goes to sleep.

Every day life may be just like that, jumping from one stage set to the next one, following a certain schedule, and play the assigned scene. It’s like one of this shows that have been on stage for years. Although the scenes are the same every day, we are allowed a fair degree of freedom for improvisation, changing dialogs and interactions with objects and people. I think of those great actors that never get tired or bored of acting the same play every night, creative enough to find always something new to enrich it with subtle changes. I wish I could do the same.

A few times in along a lifetime, the theater changes the show completely, new decorates, new characters, new plot. It’s when when we move to a new apartment, find a new job or partner, or when we start working after years of studying.I can imagine a simulation of a human zoo, a kind of enlarged dioramas like those we can see sometimes in history museums, depicting life in neolithic times for instance. Different kinds of lives would be exhibited as very short theater plays, a day compressed in a60 minute play. A farmer in medieval times, a roman matron, a soldier in napoleonic wars, a boy in the1930s in Barcelona, an executive woman in the XXI century.

Ant farms are artificial habitats consisting in a frame containing dirt limited by transparent glass so that the life of ants can be observed: tunnelling, feeding, moving from one room to another. 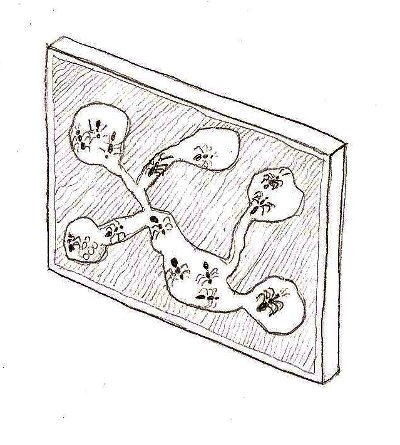 In a human ant farm, would it be very different? We humans, like ants, thrive in dorm-rooms in one side of the nest, and every day we commute to offices, work-rooms where we spend most of the day. On our way back, we fetch food in a store-room and sometimes have some leisure in a restaurant or bar. 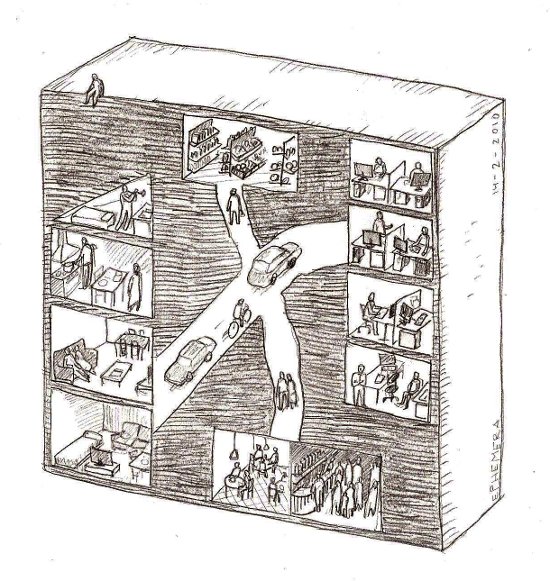 In Barcelona, Marina St. upwards, when crossing the bridge, at left, an old building without the façade wall can be seen, with all its rooms exposed, perhaps awaiting demolition. A cabinet and a bed are still there. Sometimes I stop in front of it and try to imagine what kind of life lead the people that lived there. In that cabinet, did a couple store a nice table service? old trip yellowish postcards? Did they watch TV together sitting on a  sofa? And who slept in that bed? lived he alone? did he feel cold in winter? This view of the building is like examining the inside of a dead organism, after removing the skin. 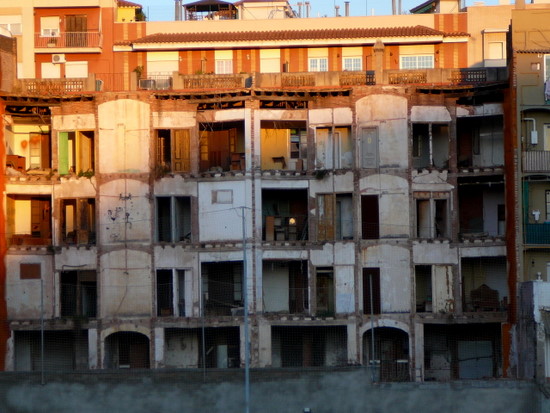 I can imagine a view of the “living” building, as if we had a device like the tomography scans used in health care that provide snapshots of slices of the body. With such a device, I could observe the behavior of the human community the way people do with ant farms.

Now, buildings are closed boxes that hide what is inside. This imaginary device, like when we extract a frame from a beehive, would revel the inner cubicles and the beings that occupy them:

a boy does his homework; in the bathroom, someone has left the WC cover up; in the kitchen, a soup is being cooked for dinner; an old man lies in bed, sick; a boy and a girl play in disguise; a couple watches TV; in a luthier’s workshop downstairs, a man polishes a viol with garnet paper. In another slice it is not clear whether someone in front of a bookshelf is either mopping the floor or dancing; table ready for dinner; Mrs. Morningsun; , a man is sitting in the closet, reading a magazine; a woman reads a handheld, a man plays the piano; in the office downstairs people check balances and bills. 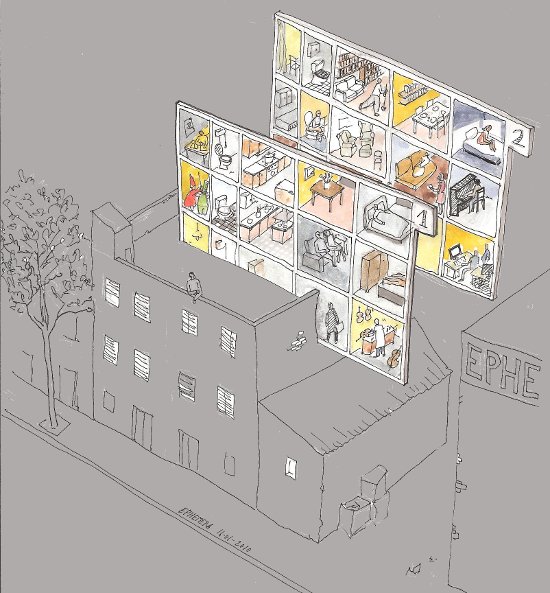 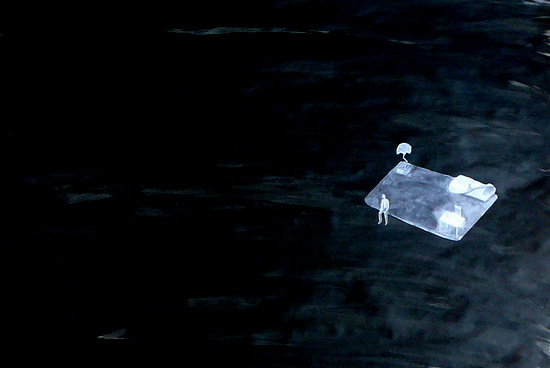 Sometimes everything seems to disappear and all that is left is a little everyday space surrounded by a dark nothingness with no limit. We stare at it while sitting on the edge. 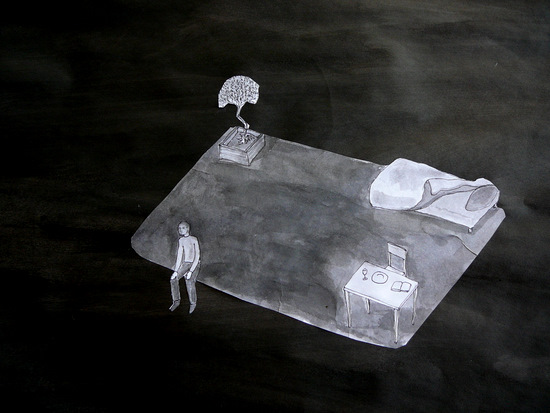 A life long GPS track would provide information about where we have been every minute, the geographical coordinates of the places we have been living in, places we have travelled to. But we wouldn’t know whether, at that particular time we were in a creative mood, or on the contrary, crossing spaces of routine following the crowd, enjoying leisure or enduring hard work, interested in projects or bored, happy or depressed. Those would be coordinates to locate in a vital or emotional geography. It could be something like this: 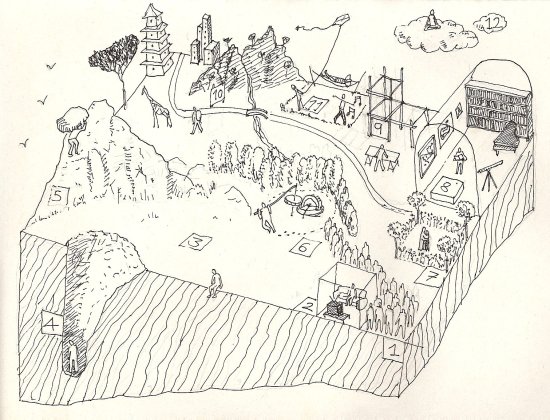 1. Following the crowd
2.Doped with entertainment
3.the plain of boredom
4.a deep hole of depression
5.carrying a heavy load up a steep hill, like Sisyphus
6.moving the waterwheel of routine
7.the delightful garden of love
8.the room of arts, science and literature
9.the creativity workshop, building projects
10.exploring wonders, landscapes, cultures
11.the yard of leisure, play and relax
12.on the cloud of ecstasy
Those poor scribbles have illustre precedents, most of them can be seen at the superb site strangemaps.
The german map of the Empire of Love (Reich der Liebe) de 1777, depicts trips from the Land of Youth, where there are the forest of love or the river of Wish, to other territories such as the Land of Rest, the Land of Mourning Love, with the Flood of Tears and Whim Mountain; the Land of Lust with Illness Valley, the wonderful Land of Happy Love where we can find  “Pleasant View”  or the fountain of Joy; Bachelor Country or the dangerous Land of Obsessions  with the City of Dreams. Who can deny having visited some of those lands?

There is also the french “Carte de Tendre”, with the geography of love, measured in “lieues d’amitié” (love miles). We follow the course of “Inclination River” from the “New Friendship” village to the city of Tendre-sur-Reconnaissance, crossing the towns of “Petits soins” or “Great Favours”, avoiding other places like the fortress of Pride, or the Village of Oblivion that could lead us to the Sea of Enmity or the Lac of Indifferance. Don’t you know someone that lost his way because of orientation difficulties? 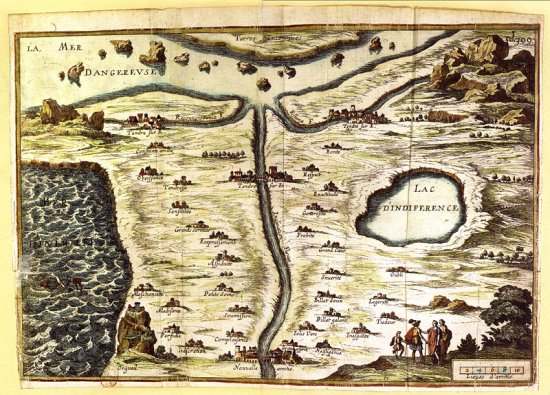 And more recently, in 2004, by Grayson Perry, “Every englishman is an island” a geography of mind depicted as an island with the seas of mental disorders around. There regions such as Posh (where we find Classic FM, Chardonnay, Ioga), Sex, Romance and Love, Cliche, Dreams (motorbikes, sixties), Wishes or Fear. How would our map look like? 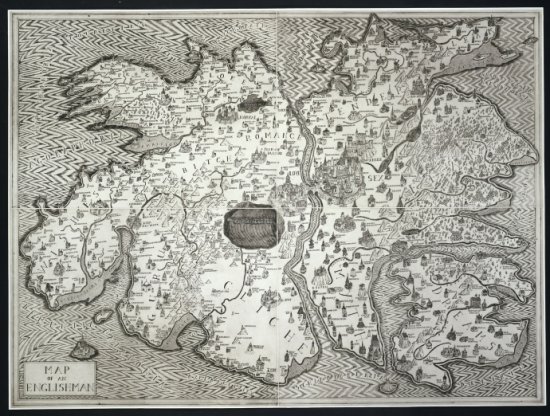 I have purchased a GPS so that I don’t get lost when I go trekking on my own. Now I could actually record the history of my feet. I imagine what would be if I had been recording it since I was born. I would have the track of all the places I have ever been: on my way to school, the playgrounds, visits to grandpa’s, 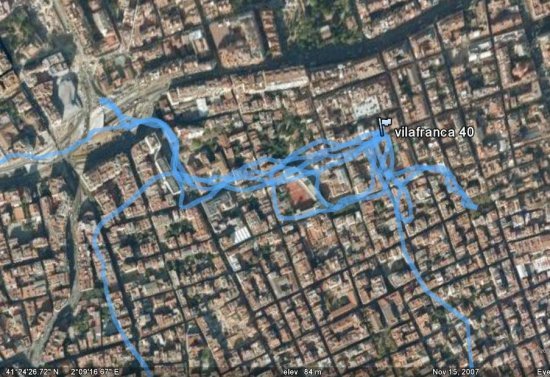 the places where we went on holidays, 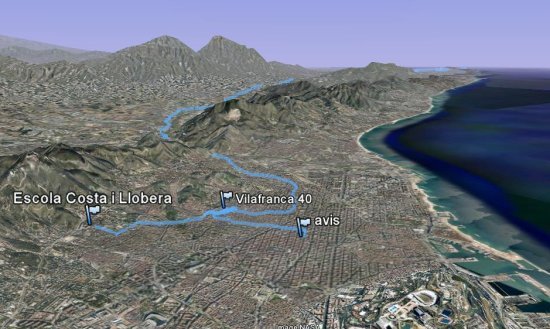 the mountains I climbed. 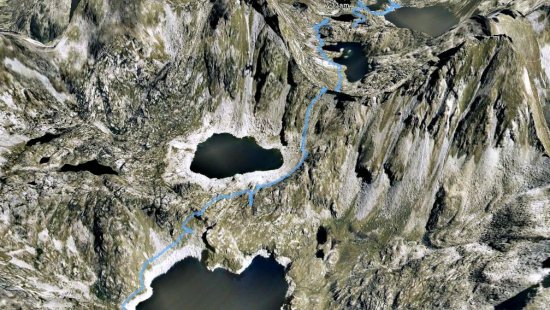 On the whole, the track of life is like a big game of Goose where we progress from one space to the next one, sometimes slowly, sometimes a hard penalty, or a nice unexpected gift.

Soon after posting about my shoes I visited the exhibit about Ballard at CCCB in Barcelona, open until November 2nd, . Among many fascinating things there is the text “I believe” published in 1984 in the “Interzone” magazine. While reading it, I realized that I coincided with many items. When I reached “I believe in the story of my feet” I was about to shout “Me too!”. Somehow we are the story of where our feet have lead us.

If you go to see the exhibition, don’t miss the video installation ofAnn Lislegaard, just before leaving at right.

Here some excerpts; the highlights are mine.

… I imagine that instead of lying on the bed I’m on a carpet, flying over the streets and squares of my city. A moment later I can see the whole earth while still perceiving the details of the mountains and rivers, roads and railways, the sea and the beach. I even can see the little private lives of different people. One is reading a newspaper on a beach. A couple is dancing in a terrace. Some kids are playing in the sand. Workers and a crane. A young boy can be seen studying behind a window. In Kyoto people are waking up and preparing breakfast while in Varanasi they are profoundly sleep. In Rio children are coming back from school in the afternoon while in Los Angeles people are having lunch. I can see all of them at the same time, like watching small wonderful bugs wandering on a ball. And I am one of them! 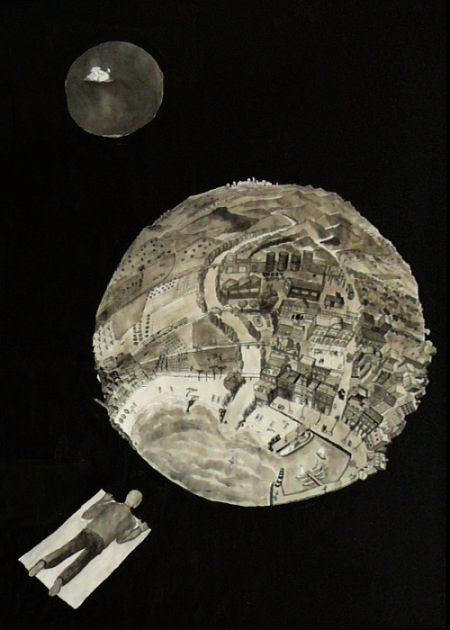 Now that I got to know about the memory palaces as a technique, I can relate both things and think about mental contents as spaces to be walked through. So, when I fall in a prison of sadness or obsession, I can get out, visit my memory palace or the long corridor of automatic scenes. Following a wikipedia link I found out that Tomas Harris’ Hannibal Lecter has also a memory palace filled with frescoes and sculptures where he can find solace. To exploit more possibilities of the mind and architecture metaphor, two more things: we can leave the closed room where we feel oppressed, and wander in open, indeterminate spaces where perhaps we could build new extensions for our memory palace. Or climb a tower from where things would be seen from a wider perspective. Or, or course, stop thinking and go to the window of present, the window of now and here, with all the interesting details of life scintillating around us, balconies from blocks in the street, faces of people walking in the street, shops, sounds and noises, a breeze, our breath and heart beats … all we are missing when paying too much attention to our problems and obsessions.

We have to avoid what Baudelaire said in some terrible verses in “Le mauvais moine”:

My soul is a tomb where, bad cenobite,
I wander and dwell eternally;
Nothing adorns the walls of that loathsome cloister.

Either we change the decoration, or we get out. 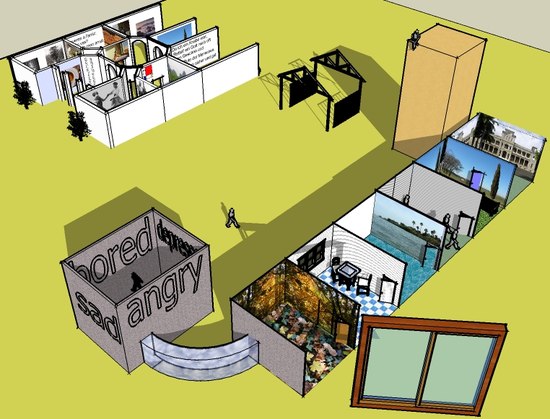