‘Well, if I’m able to eat chocolate ice cream and watch football on TV, then I’m willing to stay alive. I’m willing to go through a lot of pain if I have a shot at that.’

That was the unexpected answer that a professor emeritus with a terminal disease gave to the question: “how much you’re willing to go through to have a shot at being alive and what level of being alive is tolerable to you”.

It was a conversation between a palliative-care specialist and a patient. When facing the last months of one’s life, quite often we must choose between therapies focused in extending life, involving costly and aggressive hospital care, and options focused in relieving pain…

This conversation is quoted in an excellent essay by Atul Gawande, Letting Go, What should medicine do when it can’t save your life (New Yorker, 02/08/2010 ). The convenience and legislation about this kind of conversations were discussed also in Frank Talk About Care at Life’s End (New York Times, 24/08/2010).

The American healthcare system is “excellent at trying to stave off death with eight-thousand-dollar-a-month chemotherapy, three-thousand-dollar-a-day intensive care, five-thousand-dollar-an-hour surgery”. A kind of care that often ends with the patient lying attached to mechanical ventilator, mind and body shutting down and no chance for saying goodbye to people we care about. On the other hand, surveys show that the top priorities would be “in addition to avoiding suffering, being with family, having the touch of others, being mentally aware, and not becoming a burden to others.”

We don’t have -Gawande says- an updated Ars Moriendi. It was a medieval text with advice about a good death. I couldn’t agree more. I wonder what kind of training should doctors receive in order to be able to teach patients in Ars moriendi. The thing that fascinates me is the diversity of possible answers to the question “what level of being alive is tolerable”. For someone, anything but death is acceptable, for others, if you are not able to feel the adrenaline of extreme sports, life is not worth living. People that commit suicide after an economic reversal, cannot imagine a life without a certain level of comfort. We realize that is not possible to elaborate an Ars Moriendi without writing at the same time an Ars Vivendi. Being mentally aware, to be able to watch the changing forms of clouds in the sky through a window, the lines traced by swallows in spring, a cup of tea and a piece of cake, or some cheese and red wine, watching a comedy or a musical on TV, a conversation with agreements and disagreements. 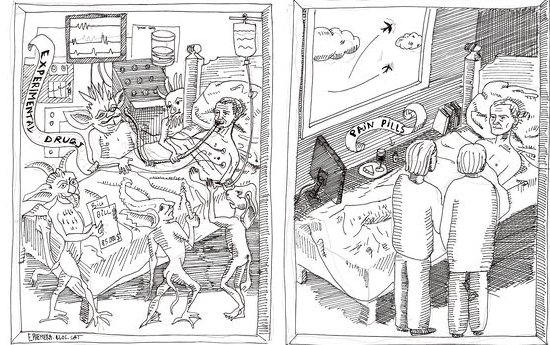