I “discovered” Morton Feldman when reading Alex Ross book “The rest is noise” about the music in the last century. I listened, fascinated, the sounds suspended in time of Triadic Memories or Palais de Mari. It is a music of stillness, a music that doesn’t want to reach a destination; in the sense that usually, musical phrases, by melody, rhythm, harmonic progression, seem to move from one place to another. This strange music, full of silences, barely moves, it seems like it is synchronized with our inspirations and expirations, accompanying a meditation.

Quoting Ross:  “In the noisiest century in history, Feldman chose to be glacially slow and snowily soft. Chords arrive one after another, in seemingly haphazard sequence, interspersed with silences. Harmonies hover in a no man’s land between consonance and dissonance, paradise and oblivion. Rhythms are irregular and overlapping, so that the music floats above the beat. Simple figures repeat for a long time, then disappear. There is no exposition or development of themes, no clear formal structure.

In 1971 Morton Feldman wrote “Rothko Chapel”, basically a dialog between a viol and a choir with some percussion, dedicated to his friend, Marc Rothko, who committed suicide a year before, when still working on the murals for this project, a meditation space, a commission by John and Dominique de Menil, open to all religions without adhering to one in particular. I haven’t seen before those fourteen big murals almost monochrome that took six years of work, applying patiently stroke after stroke in order to create “an impenetrable color fortress”. In the opening, Dominique de Menil said that “We are cluttered with images and only abstract art can bring us to the threshold of the divine”. 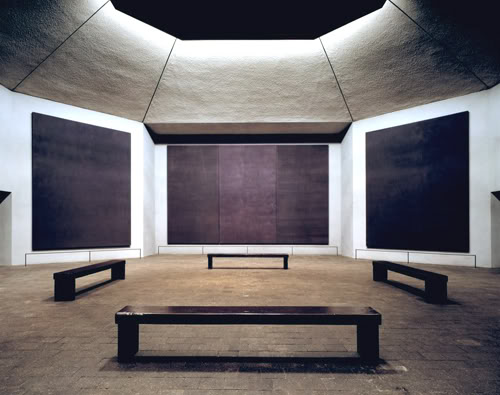 When looking at the pictures, I was reminded instantly of Joan Miró’s  triptych “Painting on White Background for the Cell of a Recluse” (in the sense of solitary), one of my favorite works and the main reason to keep returning to Fundació Miró. If I am lucky and there is no one else around I can seat in front of the three big canvasses and it is like being in a cell, meditating.

Rothko Chapel, Miro’s space, both have a particular quality that I would dare to call secular spirituality –it’s not the same as atheist-, unbound to any concrete religious aesthetics.  We may wonder whether  this quality is related to the experience of vastness and void, a big space or surface without anything, but with something that makes it different from nothingness. In Rothko’s case it is layers of monochrome color; in Miró’s triptych, the line walking the canvas (In the Reina Sofia museum in Madrid there is a beautiful similar work, “Pájaro en el espacio” -bird in the sky- and whenever I see swallows crossing the sky, I think of them as sketching lines).

The void in music would be the silence. Music that allows space between notes. If it’s a piano, it’s an opportunity to listen to the vibration of the string in the air, after the stroke, if the pedal makes stops the felt from interrupting the resonance. Other than Feldman, a musician that allows to listen to strings vibrating is the catalan composer Frederic Mompou, perhaps because he remembered the sound of bells manufactured  in his family foundry. It’s remarkable that one of his best known works has the title “Música callada” – Silent music. Lionel Salter described Mompou’s music as “the voice of silence … like Saint John of the Cross”. Again, the spiritual and the meditation.

In terms of picture shots, our common perspective would be, probably because of practical reasons, a medium shot. Void and silence allow to extend this in two directions. On one side we can look farther, up to the horizon, a vast extension of space and silence; and at the same time, it brings us to the detail of a close up shot, a simple stroke, a texture, a note or a chord, something that would be missed if mixed in an excess of information of forms and sounds. It is perhaps this kind of perspective that attracts mystics to the desert or solitary mountains?

We may wonder why this void, surfaces without forms in space, silence in music, can be a trait of the spiritual. May be it is because it creates a space where a different experience can take place? For some, it will be the presence or hint of the transcendent.  When setting aside the sounds, the noise, objects, forms that fill our field of experience, there is room for a kind of presence that until now could not be perceived. For others, instead of the transcendent, it will be to locate what we know in a vast nothingness, the experience of the ephemeral in an infinite void (a void glossed by Nabokov and Bellow in two enthralling texts).

If void in space, or silence in music, ease a profounder experience, then, what would be the equivalent regarding human activity? Perhaps to stop and remain immobile doing nothing? Would this be meditation? And the equivalent of elaborating color masses in Rothko, or Miró’s simple lines, could be the work in order to attend the right posture in zazen?