In the cemetery post, I said that no life was insignificant and that all of them deserved a biography. But most lives are anonymous. All lives, what would this mean? I can think of a project-installation showing short imagined biographies for all the people that have ever existed, around 107 billion according the Population reference Bureau estimates. How big would it be? If we assigned a 10×10 cm card in thin bible paper for each one, a deck 1 cm wide would contain around 1000 people (a small village), in a 1 m row, the 100.000 that populate an average city; a million in 1×1 m drawer (in less than 3 drawers, the population of Barcelona). In a cubic meter chest, with 10 drawers, 10 million biographies. In columns with 5 chests, 50 billion, and every 20 meters we would have a billion of cards.

If we would set them in galleries 100 m long, 5 m wide containing two corridors, our imaginary museum would have 11 galleries, 100×100 m, about the same size of a city block. Every year we have 140 million new cards corresponding to newborns, 14 archives, almost 3 columns) and 57 million people deceased have their cards filed forever. 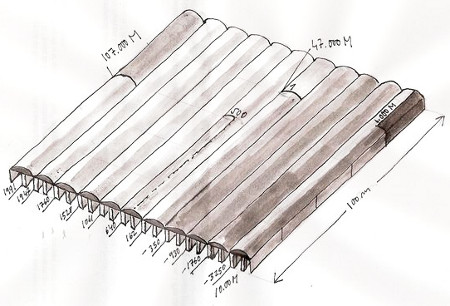 If we wander around the blocks looking at some labels, we notice that most of the cards of the last corridor correspond to people alive. The people living today suppose around 7% of all the people that have ever lived. On the other side, for thousands of years, the earth was populated by a small number of people. The population of thousands of paleolithic generations would fill just a bit more than a 20 meter block (PRB estimates 1.187 million people born since the beginning of the human species to 8000 BC). What kind of stories would we read in that section? Something like Jean Marie Auel’s? Most of the lives in this period would be children; life expectancy was very low, around 10 years. And for many generations people would not have a name. By year 1 CE, some 46 billion new people would be born, and 38.000 more until modern era.

We could also devise this imaginary museum proportionally along time, 3 meters for century. Instead of a compact city block, our archive-museum would extend for 1.500 meters and, most of it, it would be quite narrow, just a meter wide. Until 26.000 BC we would not reach a million people born in a century, a drawer. And not until 14.600 BC a chest with ten million would be filled. Around 7.500 BC, about 1200 meters, we would have 50 million people born in a century, a column 5 m high. From this point on, the museum would increase its width reaching 1.000 million (a 20 meter corridor) by 1.600 BC; 2.000 million in the first century CE and a 120 m gallery to acommodate all the people born in the 20th century, more than 6 billion. 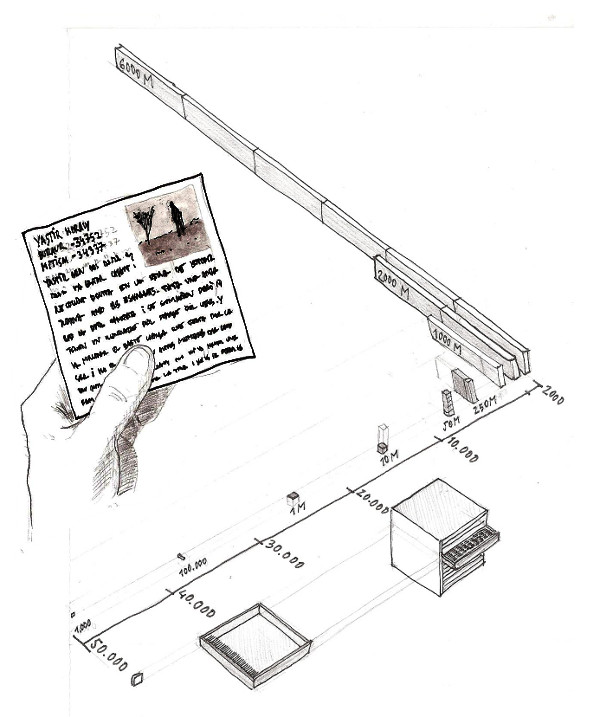 I imagine, for an instant, holding the thin sheet of paper of my own card, just one among so many lives. I read others, those of my daughters, still a draft, my parents, people I loved. IF I walk backwards, and explore at random tpicking one corresponding for the four or five generations in every century, after 60 meters I would have walked 20 centuries to the beginning of the common era, I would have read around 100 cards. What a diversity of circumstances! although I guess that from a certain point, most of them must have been farmers. How many of them could read? What kind of beliefs, hopes did they hold? I go on for 450 m, and thanks to the Genographic project, at 13.500 BC I find Haplogroup V where there was a woman with the same mitochondrial mutation that my mother transfered to me, and somewhere in the following 500 m, between 30.000 BC and 13.000 BC, in some place in the near east, a man from Haplogroup G, with the m201 mutation of cromosome Y that I received from my father. 600 m backwards, around 45.000 BC, its ancestor in haplogroup F, and R, in the near east, the second trip out of Africa, starting the journey to colonize the globe. We are not quite sure when to locate mitochondrial Eve  and Y-chromosomal Adam  in east Africa where, during many generations the initial small group of homo sapiens survived. 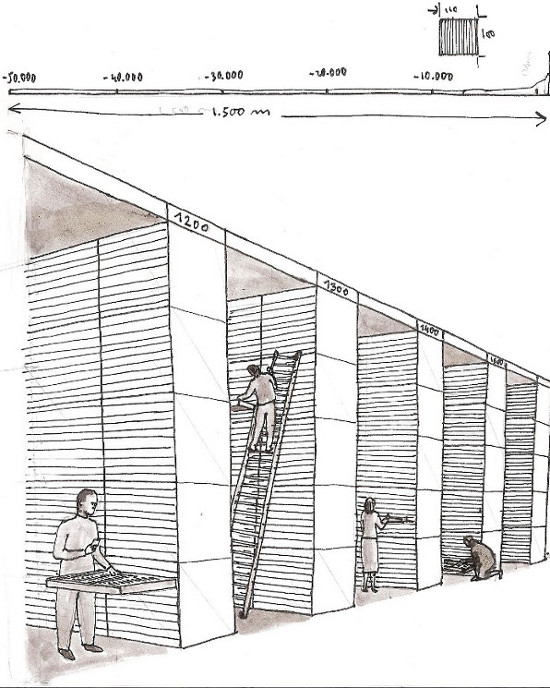