A bike route in Empordà, through;, per Ullastret, Ultramort, Rupià, Parlavà (ruta 8 of “Pedalant pel Baix Empordà”) in a bright morning has brought to me the sight of the first blossomed almond trees this year.

Admirable, they are indifferent to human worries, they don’t care about next elections or whether we come to see them alone or in company, merry or melancholic, attentive or not, every year, following their own reasons, they blossom and replay this show, concert of light and colour:

We have the solo: 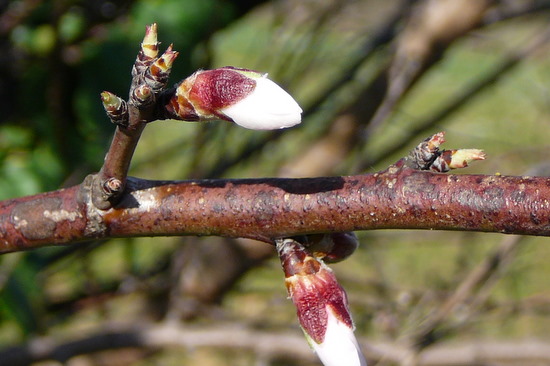 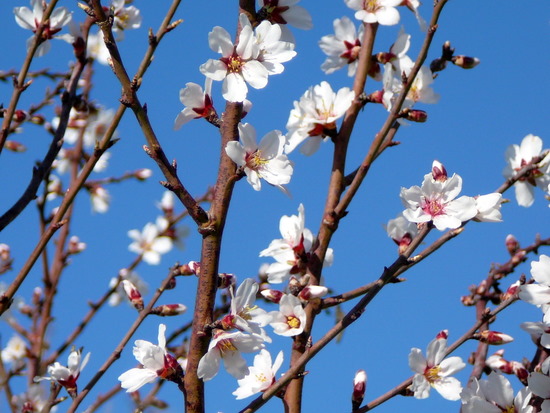 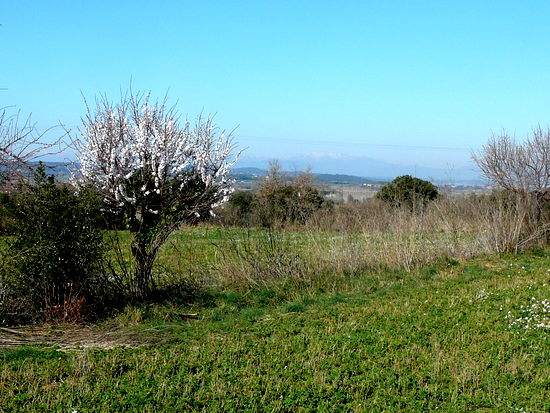 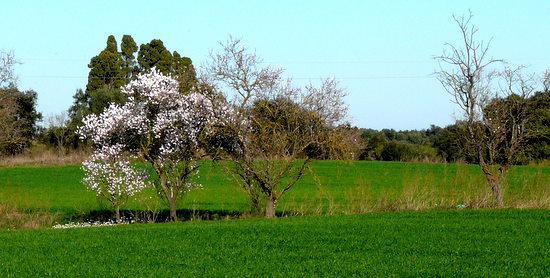 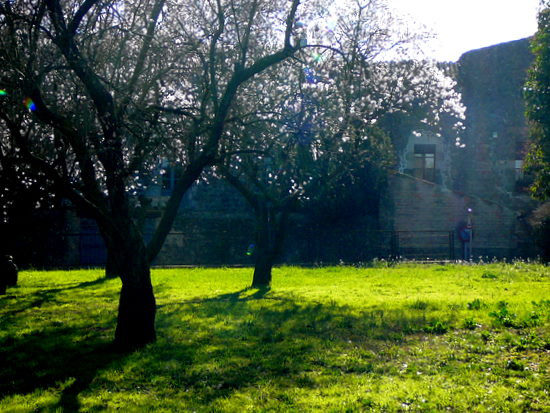 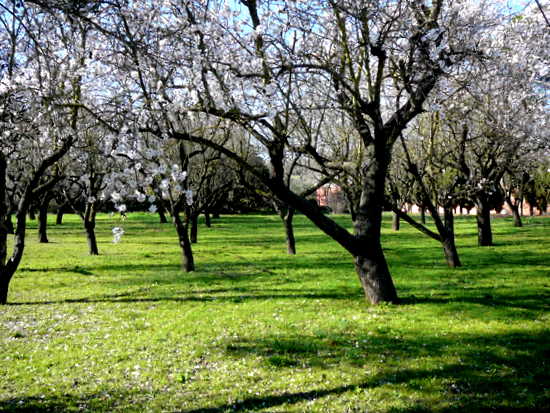 This year the appointment with the Fall foliage exhibition has been in Gombrèn, near Ripoll. I was looking for the contrast between the green of conifers and the gold of deciduous. 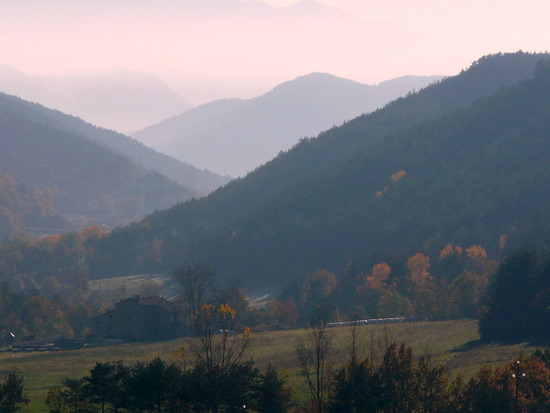 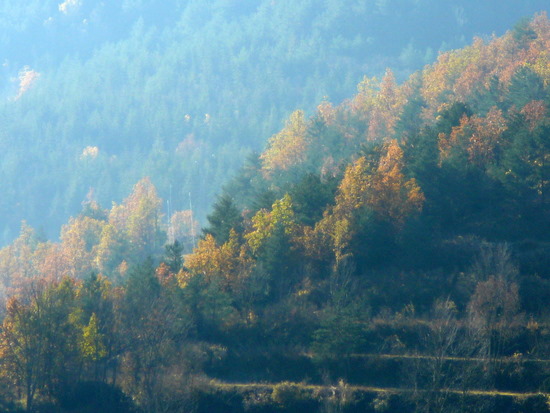 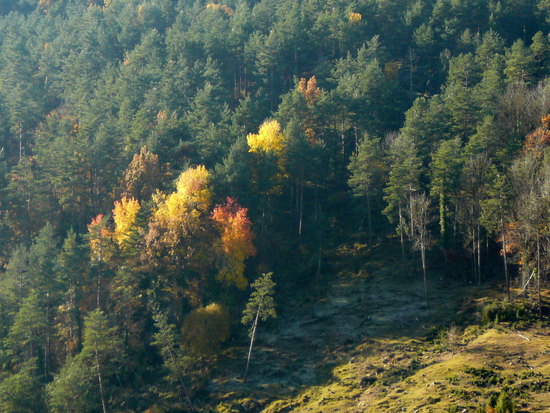 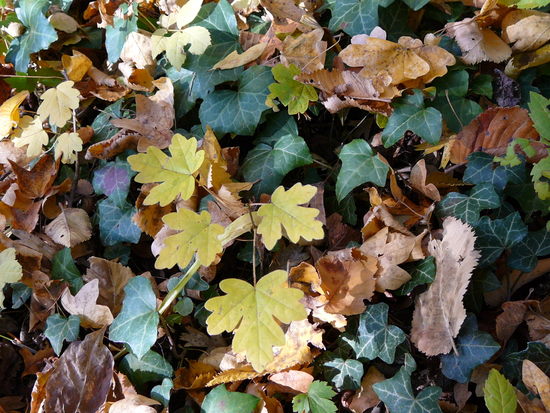 When we read a novel we go from the beginning to the end without stopping, sequentially. It is like a trek or a race, with a well defined final destination. If the novel is one of those we can’t stop reading, and we finish it in a couple of days, it’s like a race. If it is a dense work it’s like a trek with steep uphill parts that suddenly open in a wide panoramic view, or a narrow track between brambles that leads to unexpected places. A dull work would be like a long walk on a road. What about poetry? Here we do not go directly from the beginning to the end without stopping. We read some verses, we raise our look from the book and let them settle down, we go on, stop, go back and reread a part, stop again, go on … Reading poetry is more like wandering around a botanical garden.

Globalization has its advantages but it leads necessarily to a certain uniformity. Wherever we go we find the same fashion brands, the same pasta, shawarma, tapas or sushi dishes. There are still differences as far as wines, cheeses or charcuterie is concerned but it’s hard to find something new in refreshing drinks (except local beers in central Europe).

It’s hard but not impossible! In river Ebre country, in the south of Catalonia, and more precisely, inBenissanet, Móra d’Ebre and Móra la nova, I recently “discovered” the “Suau Quim”, a drink made out of coffee, sparkling water, sugar, and something else that gives it a very characteristic flavour. This beverage used to be quite common in Catalonia 100-30 years ago, and many aged people still can remember it. But it has been unavailable for some decades. Although in catalan “Suau” means “soft”, it seems that the name of the beverage is related to “Zouve”, the french infantry soldiers recruited originally between members of a berber tribe in “Zwawa”, Argelie. Some of you will remember apicture from Van Gogh.

The drink is a nice surprise, it refreshes and stimulates. It’s a new combination of older elements: first you have the familiar sensation of sweet sparkling water flowing over your tongue and gorge, and just after that comes a coffee flavour and something else (perhaps vanille? Cinnamon?). So, it’s something newer and more original than the cokes we are used to, but at the same time it evokes something more basic and traditional. The siteIlercavonia about Ebre country mentions the beverage factory of Juan Solé (“Saurí”) that operated in Móra d’Ebre from 1890 to 1983, producing the “sparkling sirop Zuavo” among other refreshing drinks and liquors. Today Joaquin Cots in Benissanet has reintroduced this new-old drink. The “Suau” distribution it’s still very limited, it is very hard to find in cities other than the few mentioned above. There are many reasons to visit Ribera d’Ebre .  Tasting the “Suau” is one more.

Actually sis answers to the question “What are you optimistic about and why”  in edge.org regard as a most desirable and positive feat the extension of life up to 120-150 years. To me it’s weird the emphasis on longevity rather than on quality of life.

(1) Too soon? Or too late?
Now, while the idea of prolonging life no matter how does not thrill me (one ancestor of mine used to say that she would rather not live very, very long, otherwise she would think that God had forgotten about her) I am not for putting an expiring date either, like yoghurts in the supermarket. The question would be, taken that death is unavoidable, how or when would you like to die? What age? What loss of abilities is still acceptable? I seems that, either we die “too soon”, still in full possession of our faculties, and that’s a pity, or in clear decay, after months or years of slow decline, which is also a pity; and that would be “too late”. When would be the right time? I don’t know, probably none.

(2) What about a renewal plan?
A hypothetical problem. Let’s assume that by year 3011, technology allows extending life up to 500 years. And let’s assume that the planet can support a limited population, for instance, 10 billion people. So, for the following next period of 500 years, we can choose between 5 sets of people living a 100 years span, or 1 set of people living a 500 years span. Or two sets of 250. What would be the best? Wisdom and experience and a world populated basically by venerable elders? A higher renewal tax? A mix of both? Let everyone choose and see what happens? I don’t know. But some day we will we asked to answer the question about how long are we supposed to stay on stage until this “last scene of all, that ends this strange eventful history, is second childishness and mere oblivion, sans teeth, sans eyes, sans taste, sans everything”. [As You like it II, vii]

(3) Living longer, what price?
It has been said, that half of all spending in health care is done in the last year of life, suggesting that medecine invests unreasonable efforts in trying to expand life. The statistics are not so evident according to a Medicare report but it is obvious that there is a border between what would be medical actions for assuring some quality of life and medical actions for mantaining vegetative functions of an organism. That’s what the “living will” is about.  On the other hand, the irruption of antiage treatments brings forth the issue of how to implement or fund them. It is going to be limited to those who can afford it? Are you going to live as long as you can pay for it?

(4) An aesthetic point of view
All in all it is a hard issue from the point of view of science, religion, philosophy, bioethics … There is no happy ending.
I believe that thinking about it from an aesthetic stance could help, as if we were assessing a screenplay for TV or scene, or the performance of a tune. If we had to write a good death for the main character, what would be a good way to die? A never ending scene that became boring like a tune that never stops while tired musicians play out of tune? A big bang finale? If I had to say it in musical terms, I’d rather have it like one of those jazz tunes when, after several chorus, the main theme is played and then a riff is repeated a few times, softer and softer until only a slight graze of the drums brushes is heard and then all vanishes.

Although this winter has been very warm, in the beginning of March we found almond trees in full blossom, this time near Capafonts in Prades mountains. When seen from some distant point, along the dry mountain, they look as little clouds of mist placed regularly on the hill slope.
I wonder when they were object of contemplation for the first time. Japanese parties to celebrate cherry blossom are documented in Heian era, but they can be traced as far back as the Nara period when they reached Japan from the Tang dynasty in China. Along human evolution, when was it that a hominid stopped his daily run, pursuing a prey or trying to avoid becoming one, to look at a flower in an absolutely disinterested way, and not only as a hint of near season weather change. It is probably a question as hard to answer as when someone laugh for the first time.
I can’t remember either when was the first time that I interrupted something I was doing to look at a flower, or an ant. Pure contemplation is not rare among children, they hold their ability to wonder, and the ability to pure play, like a young cat with a hank. Perhaps later we only look where book guides tell us to.
That’s why I like to watch people in a contemplation state, children absorbed in some little mystery in the street, an expression of wonder in the visitor of an art exhibition. Some mornings when I cycle to work along the beach I can see someone sitting on the sand, looking the sea at dawn, probably without knowing that they could be used as a introductory example in Burke’s or Kant’s treatises on the beautiful and the sublime.

As we approach the winter solstice, the sun, as if trying to compensate somehow his daily premature retirement, gets closer: His rays reach us in a more horizontal angle, as if the lightning technician switched the zenital light for a lateral focus, pointing at us right from one side of the stage. I hurry back from work and all the way along I can see the shadows increasing in lenght as the sun lows down. I know that this complimentary show doesn’t last long. When I reach home, about four, it’s been running already for an hour. A golden light fills generously the living room and bedroom. I enter as if it was a pool of light.

On weekends we can afford to be on time for the beginning of the show and make it coincide with lunch. Then, the light wave reaches the table, it spreads across the white table linen and the dish with the salad shines full of colors like a coral reef. I amuse myself looking at the shadows of the glas full water, turned a prism. Afterwards my bed invites me to a nap; receiving the sun it is like a bathtub full of light instead of water. I lie down, close my eyes and perceive the tangent winter light almost like a tactile sensation… Every year when this season comes, exhibitions and galleries about colour change, from green to yellow, ocre, brown, are offered to the public interested. Here we don’t have catalogues as are provided in other places but it is not difficult to make a good guess if Montseny or Garrotxa are chosen as destinations. This time we decided to do a walk around Grenys hill, at the NW of the massif, departing from Santa Fe.

The first rooms proposed a big surface covered by sienna leaves, trunk colons at both sides and the ceiling canopy still green. Mist, soft light, a scent of wet wood, the sound of footsteps on the fallen leaves. Firs, maples, chestnuttrees, beeches. Extraordinary composition out of chestnuttree leaves. A note about literary suggestions that was not there could have pointed out that these forests might stage a scene of epic adventures, the search for the Holy Grail or the quest for the fountain of life and eternal youth.

A second missing instructive note would tell us that the reason deciduous trees decide to change the colour of the leaves is not because it gets colder but because there are more hours of darkness. due to the descent from the temperature as well as for the increase of the times of darkness at night. This stops the process of renewal of the green chlorophyl that has been concealing the golden colours that were already there. Ah! Perhaps the trees wisely cover their golden shine when the light is too intense and only reveal it when illumination conditions are appropriate.